Breakthrough vision and a courageous spirit

Twenty-five years ago, Voyager Aircraft’s non-stop, unrefueled flight around the world placed Mojave on the map and placed Dick Rutan in the history books. In December 2005, Rutan set another world record for the longest distance in a ground-launched, rocket-powered aircraft. He flew from the Mojave Spaceport to the California City Airport in what’s called the “shortest long distance flight.”  In 2005, Rutan formed the Voyager Aerospace Corporation. He has four projects emerging with this company, and two of them are unique aircraft.

Breakthrough vision and a courageous spirit have continued to inspire Rutan for many years. He received his solo pilot’s license and driver’s license on his 16th birthday. He flew 325 missions in Vietnam, 105 of them as a member of the Super Sabre Forward Air Control, a high-risk operation commonly known as the “MISTYs.” Before retiring from the Air Force in 1978, Lt. Col. Rutan was awarded the Silver Star, five Distinguished Flying Crosses, 16 Air Medals and a Purple Heart.

In 1997, the “Around the World in 80 Nights” tour was successfully completed in two small experimental Long-EZ aircraft. In 1998, his attempt at a third around-the-world record ended dramatically with an emergency parachute jump from a pressurized capsule suspended under a 110-foot hot air/helium balloon after experiencing a dangerous fabric tear. In 2000, he went on a sightseeing tour of the North Pole, but after the airplane, a Russian Antonov AN2, fell through the ice, the pleasure trip quickly turned into a rescue mission. Rutan currently flies a Berkut home-built, experimental airplane. He plans to set more world records in the future, and even break some of his standing world records. 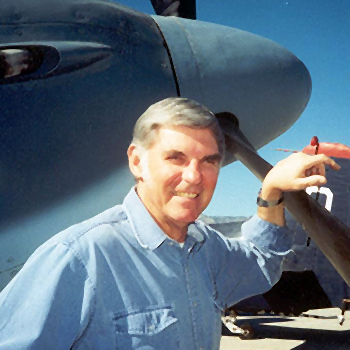