Recruiting a nation of makers: bringing jobs back home and building 21st century workers with pride

Recently, 82 percent of manufactureres surveyed reported a moderate or serious shortage in skilled workers, which has negatively impacted their ability to expand. Businesses must learn how to become more globally competitive and up-and-coming workers must have the basic skill set to grow and lead our advanced manufacturing industries.

Reshoring is the practice of bringing manufacturing and services back to the U.S from overseas. It's a fast and efficient way to strengthen the U.S. economy because it helps balance the trade and budget deficits, reduces unemployment by creating good, well-paying manufacturing jobs, and fosters a skilled workforce. Reshoring needs more effective skilled workforce recruiting to provide needed capacity and competitiveness. Recruiting needs reshoring to demonstrate that there is a solid future for manufacturing careers.

Learn how Williamsburg James City County Schools and the Association for Manufacturing Excellence, along with local manufacturers, are leveraging Project Lead The Way (PLTW) and national Manufacturing Day Celebration. PLTW is a K-12 STEM solution which provides a world-class curriculum and high-quality teacher professional development model, combined with an engaged network of educators and corporate and community partners, helping students develop the skills necessary to succeed in our global economy. Students are invited to visit local businesses to reinforce the need for STEM courses. Manufacturing Day has been designed to expand knowledge about and improve general public perception of rewarding manufacturing careers and promote year-round engagement by the community.

Reshoring Initiative produces research and support for companies bringing manufacturing and services back to America. It is focused on helping companies shift collective thinking from "offshore is cheaper" to "local reduces the total cost of ownership." This is done by assisting manufacturers and supplies make sourcing decisions by providing valuable tools and resources. www.reshorenow.org

Warhill High School is first school to be adopted by AME and the manufacturing community in Virginia. It is a leading STEM school offering the Project Lead the Way program, an Early College Pilot with Thomas Nelson Community College and Warhill being designated a STEM Governor’s Academy. www.wjccschools.org/whs/

Harry Moser founded the Reshoring Initiative to bring manufacturing jobs back to the U.S. by documenting the trend and encouraging the use of Total Cost of Ownership analysis. He previously worked for GF AgieCharmilles, starting as president in 1985 and retiring in 2010 as chairman emeritus. Largely due to the success of the Reshoring Initiative, Moser was inducted into the IndustryWeek Manufacturing Hall of Fame 2010 and was named Quality Magazine’s Quality Professional of the Year for 2012. He received a BS in ME and an MS in engineering at MIT, and an MBA from University of Chicago.

John Aughenbaugh is a Project Lead the Way teacher and CTE department head at Warhill High School in Williamsburg, Virginia. He is certified in five of the Pathway to Engineering courses and currently serves as a master teacher of Introduction to Engineering & Design. He earned his BSE in technology education at Millersville University. He fosters the growing interest in technology and engineering courses among the student body and continues to engage local business and industry to increase STEM awareness. In February, 2015, Aughenbaugh accompanied several of his students to Washington, D.C. to showcase their skills at “Today’s Innovation: Tomorrow’s Career Success,” an ACTE and PLTW event held on Capitol Hill.

Dr. Jeffrey D. Carroll is principal at Warhill High School, Williamsburg-James City Division. He has been an educator for 25 years as a teacher, assistant principal and principal, working at elementary, middle and high school levels.  He has presented at numerous conferences on the topics of organizational diagnostics, instructional improvement and social media. Since becoming the principal in 2013, Carroll has led an effort to encourage students of the potential of manufacturing and other career pathways as alternatives to the traditional four-year college plan. This effort at Warhill has resulted in the expansion of its Project Lead the Way program, an Early College Pilot with Thomas Nelson Community College and Warhill being designated a STEM Governor’s Academy. Carroll holds a BA from Yale University, an MEd from the University of Virginia and a PhD from Virginia Tech.

Glenn Marshall serves on the Association for Manufacturing Excellence (AME) strategy team for Revitalization of North American Manufacturing and leads the initiative focusing on manufacturing as a desirable career. This is designed to reduce the critical shortage of skilled workers for advanced technology, logistics and manufacturing. Marshall reaches out to business leaders, academia, students, veterans and policymakers to promote innovative ideas to create more opportunities and candidates for high-paying careers in designing and building things at home. He was the benchmarking/process excellence advocate for Newport News Shipbuilding (NNS) and continues to work with NNS in its outreach to the public schools and colleges on career pathways. 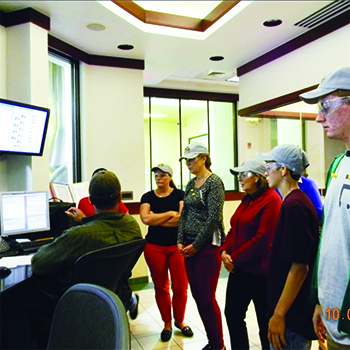