If you want to see an excellent example of people-centric leadership, employee engagement and one of the best implemented idea programs outside of Toyota, Autoliv or Batesville Casket, this tour is for you. The AME Champions Club visited Costco in 2017 and was extremely impressed. While very early on its journey, in the last three years, Costco Optical Lab has doubled its productivity, reduced its scrap by 80%, cut its lead-time by 75% and has implemented thousands of employee ideas across all department/functions. Costco is using many small improvements every day as championed by their operators, leads, technicians and more. See two robots running around the warehouse doing the work best left to robots!

Costco Wholesale Optical Lab opened in National City in 1989 as a service to its members. It started with less than 30 employees, servicing 13 locations, shipping approximately 50 glasses a day. It has since grown from a manual process to an automated state of the art facility with 750 employees and servicing over 256 warehouse locations. It is currently processing 10,000 pairs of glasses a day. www.costco.com/optical.html 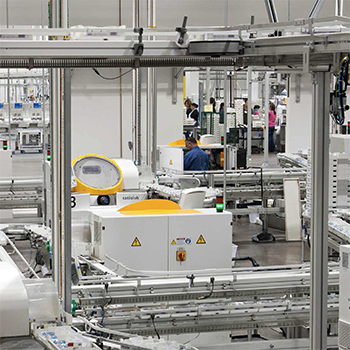