Tour attendees will hear how Costco's continuous improvement/lean six sigma program started at Costco Packaging over six years ago and how the program has spread to more than 15 other Costco businesses. Learn how, over the years, CWI staff has embraced a deliberate focus on waste reduction and process improvement throughout the building. Since rolling out the lean continuous improvement program, its leadership has welcomed and implemented hundreds of employee ideas – several of which are reflected in different innovations within the facility.

Costco Wholesale Industries (CWI) is a Costco packaging facility located in Southern California. It is one of two packaging plants servicing warehouses all over the world. The other is located on the East Coast in New Jersey. CWI West opened in National City in 1989, before moving to its current location in Otay Mesa in 2011. CWI is a cross between a manufacturing plant and a distribution center, and packages and ships more than 35 million Kirkland Signature units each year. CWI West supports warehouses in the western U.S., western Canada, Mexico, Asia and Australia, while CWI East supports buildings in the rest of the U.S., eastern Canada and Europe. CWI is a recipient of several lean enterprise recognitions from SDSU, UCSD, AME, AME Champions and the U.S. Navy in the past four years. AME recognized CWI with a lean award for its commitment to lean enterprise excellence and employee development. www.costco.com 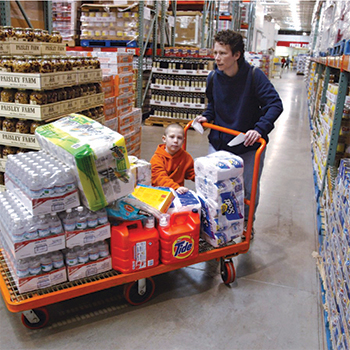