Boston is “America’s Walking City.”  Even though it’s one of the oldest and largest cities in the country, its accessibility is unparalleled.  History is around every corner, and so much more.  Boston’s rich art, music, theatre and cultural attractions, distinguished dining, world-class shopping and championship sports teams attract million of visitors each year.  While it is easy to access many of these venues on foot, Boston also has an excellent public transportation system to help you get around.
Are you coming in for the weekend? Click here for a listing of Columbus Day activities that are happening in and around Boston.

Recommended points of interest to visit

The Museum of Fine Arts (or MFA) is the fourth largest museum in the United States. It contains more than 450,000 works of art, making it one of the most comprehensive collections in the Americas. With more than one million visitors a year, it is the 55th most visited art museum in the world. Founded in 1870, the museum moved to its current location in 1909.

The key role Boston played in the American Revolution is highlighted on the Freedom Trail, a 2.5-mile-long (4.0 km) path through downtown Boston that passes by 16 locations significant to the history of the United States. Marked largely with brick, it winds between Boston Common to the Bunker Hill Monument in Charlestown.  Stops along the trail include simple explanatory ground markers, graveyards, notable churches and buildings, and a historic naval frigate. While most of the sites are free or suggest donations, the Old South Meeting House, the Old State House, and the Revere House charge admission.

Located near the waterfront and today's Government Center, Faneuil Hall has been a marketplace and a meeting hall since 1743. It was the site of several speeches by Samuel Adams, James Otis, and others encouraging independence from Great Britain. Now it is part of Boston National Historical Park and a well-known stop on the Freedom Trail housing many shops and restaurants.  It is sometimes referred to as "the Cradle of Liberty”.

The Museum of Science (MoS) is a Boston Massachusetts landmark, located in Science Park, a plot of land spanning the Charles River. Along with over 700 interactive exhibits, the museum features a number of live presentations throughout the building every day, along with shows at the Charles Hayden Planetarium and the Mugar Omni Theater, the only domed IMAX screen in New England. The museum is also an accredited member of the Association of Zoos and Aquariums (AZA) and is home to over 100 animals, many of which have been rescued and rehabilitated from various dangerous situations.

One of the most unique museums in the city if not in the country, the collection, the building, and the story of her life are all fascinating. Friends with John Singer Sargent, James McNeill Whistler, and Henry James, Gardner opened her important collection of works by Rembrandt, Titian, Botticelli, Degas, and Sargent in 1903; the museum building, modeled after a 15th-century Venetian palazzo is worth the visit in itself—especially for the interior courtyard garden and its second-century mosaic.

Visit the Skywalk Observatory, Boston's only sky-high vantage point for sweeping 360 degree views of Greater Boston and beyond. Let your eyes and ears do the walking as you experience the exclusive state-of-the-art Acoustiguide audio tour detailing the city's many points of historic and cultural interest. Audio guides are provided in the following languages: English, Spanish, Dutch, French, Japanese and Mandarin.

The North End has the distinction of being the city's oldest residential community, where people have continuously inhabited since it was settled in the 1630s. Though small, only 0.36 square miles (0.93 km2), the neighborhood has nearly one hundred establishments and a variety of tourist attractions. It is known for its Italian American population and fine Italian restaurants. The district is a pending Boston Landmark.

Shopping attached to the Hines Convention Center
There are also many places to shop in Boston. The Copley Place Shopping Galleries and the Prudential Center offer a variety of stores and award-winning restaurants to suit every need. 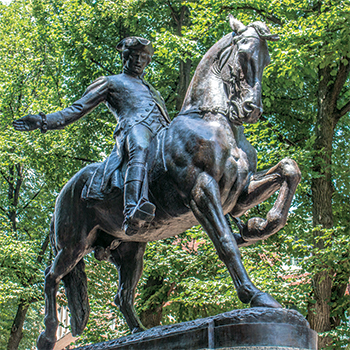