10 things we love about Boston 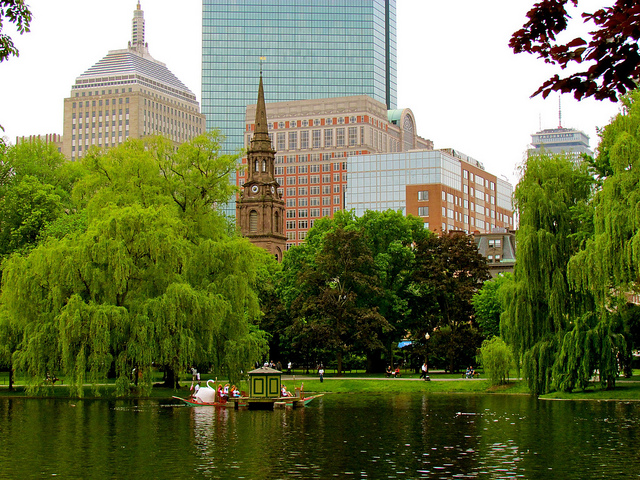 Boston is an historic American city, the capital of Massachusetts and home to more than 667,000 people in the city limits, and there are more than 4.5 million people in the Boston metro area. Here are 10 things we love about Boston:

10) The home of Dunkin’ Donuts. There’s no doubt there are a lot of Starbucks fans out there, but the first Dunkin’ Donuts opened in nearby Quincy and has been fueling productivity and serving donuts to Bostonians and non-Bostonians ever since.

9) The Fourth of July. There’s no better place to enjoy Independence Day than Boston. On this day, you can take in a reading of the Declaration of Independence at the Old State House during the day and a Boston Pops concert and fireworks at Hatch Shell in the evening.

8) Cheers in Beacon Hill. Originally known as Bull & Finch Pub, it’s the place that inspired the hit television series, Cheers. With a neighborhood vibe, this pub oozes character and is the perfect place to grab a beer and talk sports, politics or whatever is on your mind. John Ratzenberger, who played Cliff Clavin in the series, delivered a keynote speech at our 2015 conference in Cincinnati.

7) Freedom Trail. This 2.5-mile path includes historic sites such as the Paul Revere House, Boston Common (see #3), King’s Chapel, Bunker Hill Monument, Benjamin Franklin statue and the USS Constitution. It’s a place to explore the birthplace of the American Revolution and the places that shaped some of our nation’s most significant moments.

6) The seafood. Boston is home to a pretty diverse restaurant scene, and it’s one of the best places for seafood in the United States. Some of our favorite dishes include clam chowder, fish and chips, lobster and oysters. The Union Oyster House is the oldest operating restaurant in the United States and has been serving customers since 1826.

5) Pedestrian-friendly streets. Boston is known as one of the most pedestrian-friendly cities in the country, and was originally designed for horses and carriages. You won’t find the grid system here. No worries, because we love to explore the winding streets by foot and take in the restaurants, pubs and historic sites.

4) Higher education. The home of the nation’s oldest university, Harvard, the Boston area has been recognized by Forbes as America’s Smartest City. Other top universities in the area include the Massachusetts Institute of Technology, Boston University and Brandeis University. Boston is also known for innovation, healthcare research and access to venture capital.

3) Boston Common. The oldest park in the United States, this 50-acre park dates back to 1634. It’s located downtown and is the perfect setting to take in a concert, go for a jog, watch people or appreciate nature.

2) Fenway Park. The oldest stadium in Major League Baseball, Fenway Park is the home of the Red Sox and the 37-foot left field wall known as the “Green Monster.” Located just 310 feet from home plate, Fenway’s left field is the shallowest in baseball, and the Green Monster is a frequent target for right-handed batters. It is the perfect place to soak up baseball history and tradition.

1) AME Boston. Boston is the site of the AME 2017 International Conference. This year’s theme is “Get Engaged” and is designed to help organizations further their lean journey and increase engagement among team members.

This year’s conference is headlined by keynote speakers including Paul Akers, John Shook, Benjamin Zander and mentalist Max Major. Witness enterprise excellence in person at plant tours from companies that include New Balance, Pratt & Whitney, Bausch + Lomb and Thermo Fisher Scientific, Inc. There will be plenty of opportunities to connect with and meet new colleagues at our new SpeedNetworking event and activities such as the AME-zing Race, Dine Around and the Selfie Networking Contest. For more information about the AME 2017 International Conference, visit the #AMEBoston website. Call to book your hotel now and get the attendee rate. Visit our #AMEBoston hotel page for more information.