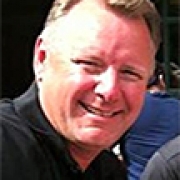 Beach: We use the FedEx model.

Greg Beach, senior director of supply chain at Seattle Children’s Hospital, is one of those rare health care transformation executives whose best friends are doctors and nurses and whose culture change work hasn’t gotten him fired. This 300+ bed health care facility can point to a 15-year history of hard transformations built first by conquering the basics, then practice and more practice, followed by kicking it up another three notches. The result is an impressive team-based series of successes that eliminated costs and time traveled, freeing up nurses to dispense more of their most precious human commodity: bedside care.

“When we first started, we focused on inpatient and clinic areas for supply management, but now we’ve graduated to the labs, operative services, respiratory care, environmental services, dietary services and more,” said Beach. “We used to have supplies ordered and delivered on 15+ pallets a night. Now, we’re on a two-bin kanban system where supplies are delivered in low unit of measure (LUM).”

The facility is adding surgical implants to its demand flow supply system with the desire to track utilization that will help drive standardization and ultimately reduce cost. According to Beach, they are integrating all departments’ supply management system to help reduce staffing required to manage supplies as well as reducing travel time due to the integrated delivery systems.

Beach said he believes that the integrated delivery system not only reduced travel times, but it allowed Seattle Children’s pros to reduce inventories as well as movement. “We’ve got one group delivering — it’s the FedEx model,” he said.

Just systemizing the delivery methods reduced panic and chaos as well. Under the old system, whenever a department needed an item, it would place an immediate request for it.

“Now, we’ve replaced the chaos with the planned delivery model,” Beach said.  “We did some time studies, and when we opened the new building last April, we wanted to apply what we had learned about delivery systems to this new opportunity to minimize space, to minimize travel as well as the number of trips.  Overall, we managed to eliminate 85 percent of unplanned calls for materials, and we reduced nursing search and travel time by more than 50 percent.”

Seattle Children’s didn’t stop at their first lean learnings with kanbans. It continued to take out inventory by asking its distributor to deliver in LUM that allowed it to reduce its on-site inventory from $1.5 million to less than $500,000. The on-site inventory consists primarily of disaster supplies. 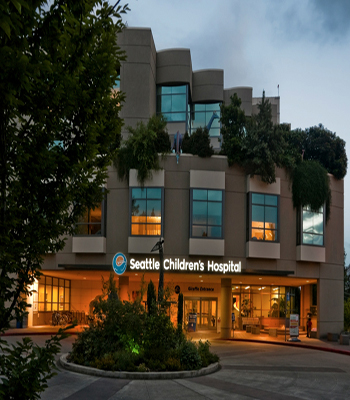 The program has continued to grow over time. “In 2007, we managed $6.3 million in supplies,” Beach said. “In 2014, as the system has matured, the number more than tripled to $19.77 million in distributed supplies, without adding new staffing, plus we maintained our performance metrics and our reduced travel and warehouse space.” One distributor, Medline, holds most supplies, although there are still a few items that the hospital must order directly from manufacturers.

The supply management changes have resulted in a savings of more than 80,000 clinical and supply chain hours annually.

“The change has not meant any layoffs,” said Beach. “It means that our clinicians are able to spend more time bedside with patients, and the supply chain can focus on exceptions rather than putting out fires.”

At this point, Beach said the operation now enjoys worldwide buy-in based on its 2008-2010 proof of concept. When the first projects were attempted, Beach worked with the internal continuous process improvement team to develop a lean culture. Following initial successes, “my team took over and sold the other leaders — one director does procurement and the other distribution,” Beach said. “With high-level advocates, momentum kicked in.

“I co-led the delivery system design with nursing that was foundational to the way we designed our new building. We knew what we had and we knew when we first brought the concept that it would be beneficial with our current general medical supplies, like labs. There were many opportunities — the model could be applied anywhere. For a scientist, for example, that meant we could apply the model and allow the scientist to go back to the bench.”  (See “Supply chain professionals doing 3P design work.”) 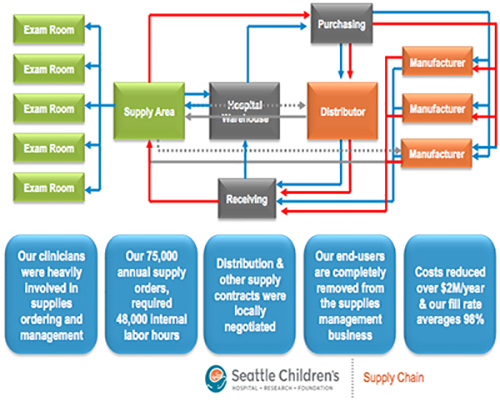 Beach and his team did not come totally unprepared into this transformation. “Sure, we learned on the job, but then we went over to Toyota in Japan, and we stole shamelessly. We looked at how the Toyota staff worked and moved. We noticed that things were brought to them — it was real-time and predictable. We saw nurses and clinicians as assemblers, so we knew we had to minimize travel based on the Toyota principles.

As for the other end of the supply chain — logistics — the team brought in the University of Michigan Tauber Institute for Global Operations to teach its leaders the basics of lean supply chain. This effort was foundational for the journey. Prior to the Tauber group arriving, concepts such as “lead time” and “fill rate” were foreign concepts for the team according to Beach.

“We focused solely on warehouse inventory turns but this did not give us any insight on whether the nurse had the supplies at the bedside in time or in the right quantity, Beach said. “We really had to think about how to apply manufacturing concepts to health care. And that’s when it all started expanding; we had focused initially on things we distributed, but then we moved to other supplies, so we were able to cut back on search time.”

Extending the Toyota Production System to the bedside for patient care was a breakthrough. The team found a way to take it one step beyond delivery to the nursing units, with supplies being sent via a two-bin system into patient rooms.  Starting April 2013, a rounding cart began twice daily in-room replenishment of the most common patient supplies — saline solution, for example — in bins, as indicated on a card tracking the highest usage products. Instituting this bin system with the new building allowed Seattle Children’s to reduce search travel time of nurses by 50 percent.

“We have more people in our department, but we haven’t added staff,” said Beach.  “In the laboratory, for instance, we took on some of their work and found that while they needed five people to do supply management, we could do it with 0.5 FTE. So when we took over their supply management work, we took some of their people because standard work for us was more efficient.” 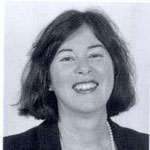 Join continuous improvement practitioners from across the country in Atlanta, August 10-12, 2020.