A family's growth fueled by crisis: The power of the Improvement Kata

“There are many things one doesn’t understand and therefore, we tell them why don't you just go ahead and take action; try to do something.  You realize how little you know and you face your own failures and redo it again and at the second trial you realize another mistake or another thing you didn't like so you can redo it once again.  So by constant improvement, or the improvement based upon action, one can rise to the higher level of practice and knowledge.”

Within the lean community, you often hear the phrase “problems are treasures.”  This is most often applied to a company’s processes, in that problems within processes need not be shied away from but rather, when surfaced, can guide process improvement.  Does this also apply to problems in our private lives?

What is a kata? A kata is something most often associated with martial arts. It is a routine you practice purposefully with the intent of making that pattern a habit. Once you learn to drive a car and it becomes second nature, you no longer have to concentrate on the mechanics of driving and can focus on navigating the road and getting to your destination. The Improvement Kata is a specific routine for improving, adapting and even innovating. It is scientific and goal-directed, not a random disconnected reaction to problems. The overall goal, as with any kata, is to make the routine of the Improvement Kata a habit that happens almost unconsciously. The Improvement Kata provides a systematic, scientific routine that can be applied to any goal and practicing it transforms you from a role of a firefighter to scientist.
Practicing the Improvement Kata’s routines develops and mobilizes your creative capabilities and makes you better at achieving goals. The Improvement Kata practice routines teach a universal “meta-skill” that changes our habits of mind so our brain’s capabilities can navigate purposefully and effectively through unchartered territory. (See Figure 1.)
Three summers ago, my wife Sarah and I discovered a devastating family problem.  She was 20 weeks pregnant when we learned that the baby she was carrying literally had half of a heart.  If he survived to be born, he would need a series of open heart surgeries, eventually culminating in a heart transplant. Whether he would live to see kindergarten would be a coin flip.  We found ourselves in a state of stunned disbelief, like a surreal but persistent daydream.  That disbelief quickly gave way to paralyzing fear as we could only see vast uncertainty before us.  Sarah and I were terrified, and it was all we could do to get through each day without breaking down at work or neglecting our one-year-old son Maxwell.
Can a problem like this actually be a treasure?  It certainly is not a problem we would choose, but given that it happened, the answer is yes.
Fortunately for us, we uncovered this tragic defect just as I was transitioning at work from quality engineering to begin practicing.  Specifically, my company wanted to experiment with deploying Toyota Kata — one of the most recently developed approaches on how to practice lean developed by Mike Rother — and I had been invited to help.  The coincidence of my family’s struggle to manage our baby’s heart defect with my professional struggle to practice lean produced a lot of crosstalk between these efforts.  Over time, the effort to help my son has grown increasingly dependent on applying the insights and skills that underlie the Improvement Kata, the methodology which is the kernel of Toyota Kata.
I did not apply the improvement and coaching kata in a formal way as I was doing at work.  There was no storyboard posted, and I did not try to teach my wife the terminology or methodology.  Perhaps we would have been even more successful had we followed the process more rigorously.  But I was guiding the process to follow the essential steps of the improvement kata — identify the challenge, grasp the current situation, identify near term objectives (target conditions) and experiment our way step by step.  It was a major departure from how my past instincts would have led me to behave, which was much more reactive and short-term focused.  Applying the kata, even informally, helped us to think scientifically and systematically about each step on our journey with a clear focus toward a challenge. The following story of that application, and the resulting benefits, is offered as food for thought to leaders who think process improvement is limited to work processes.  There is a much bigger picture. 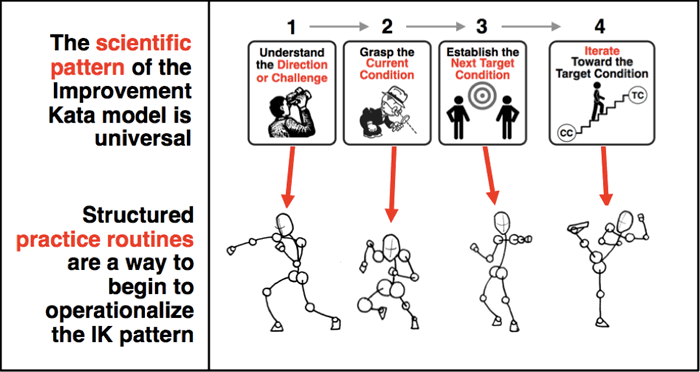 Figure 1. The Improvement Kata provides practice routines to develop scientific thinking.
Source:  Mike Rother
Background
Three months before we learned that the baby had a heart problem, I was in Ann Arbor, Michigan, to take the University of Michigan’s course on Toyota Kata.  On the first day of that course, Mike Rother, author of the book on the subject, presented a compelling seminar arguing that industry suffered from a deeply flawed approach to improvement.  Improvement had come to be about experts leading improvement events, which generated implementation plans, which get delegated to various people for follow-up.
Rother stated various problems with this approach, including the fact that many assumptions are made about what the problems really are and how the solutions would help.  He proposed an improvement kata, a set of routines that can be practiced and learned, based on understanding the direction, investigating the current state, setting intermediate target conditions, identifying obstacles and conducting a series of experiments designed to test hypotheses about how to achieve the challenging outcome.  Through this process of scientific experimentation toward a desired situation, toward target conditions, individuals begin to change their way of thinking about how to achieve challenging goals.  The key was to teach employees the skill of seeing where their knowledge gave way to ignorance and then exploring that threshold, rather than expecting employees to spout answers and form plans that were inherently unreliable because of underlying assumptions blowing right past the limits of what they really know. (See Figure 2.)
What should we do when we reach our threshold of knowledge?
1) Acknowledge it.  (Difficult to do, until you get into the habit.)
Key realization:  There's always a threshold of knowledge.
2) Stop and see further by conducting an experiment.  Don't deliberate over answers.  Deliberate over the next experiment. 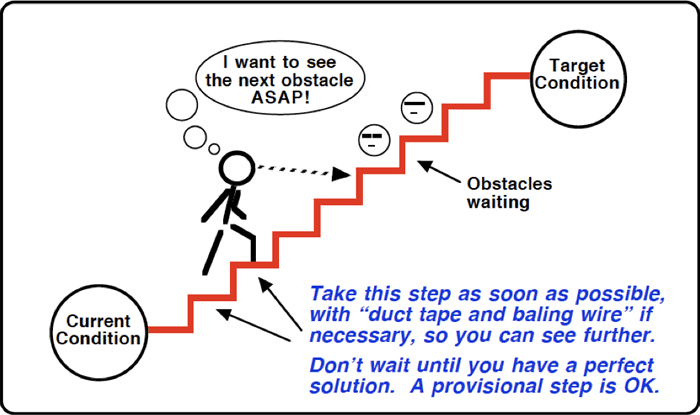