How to build a joyful workplace 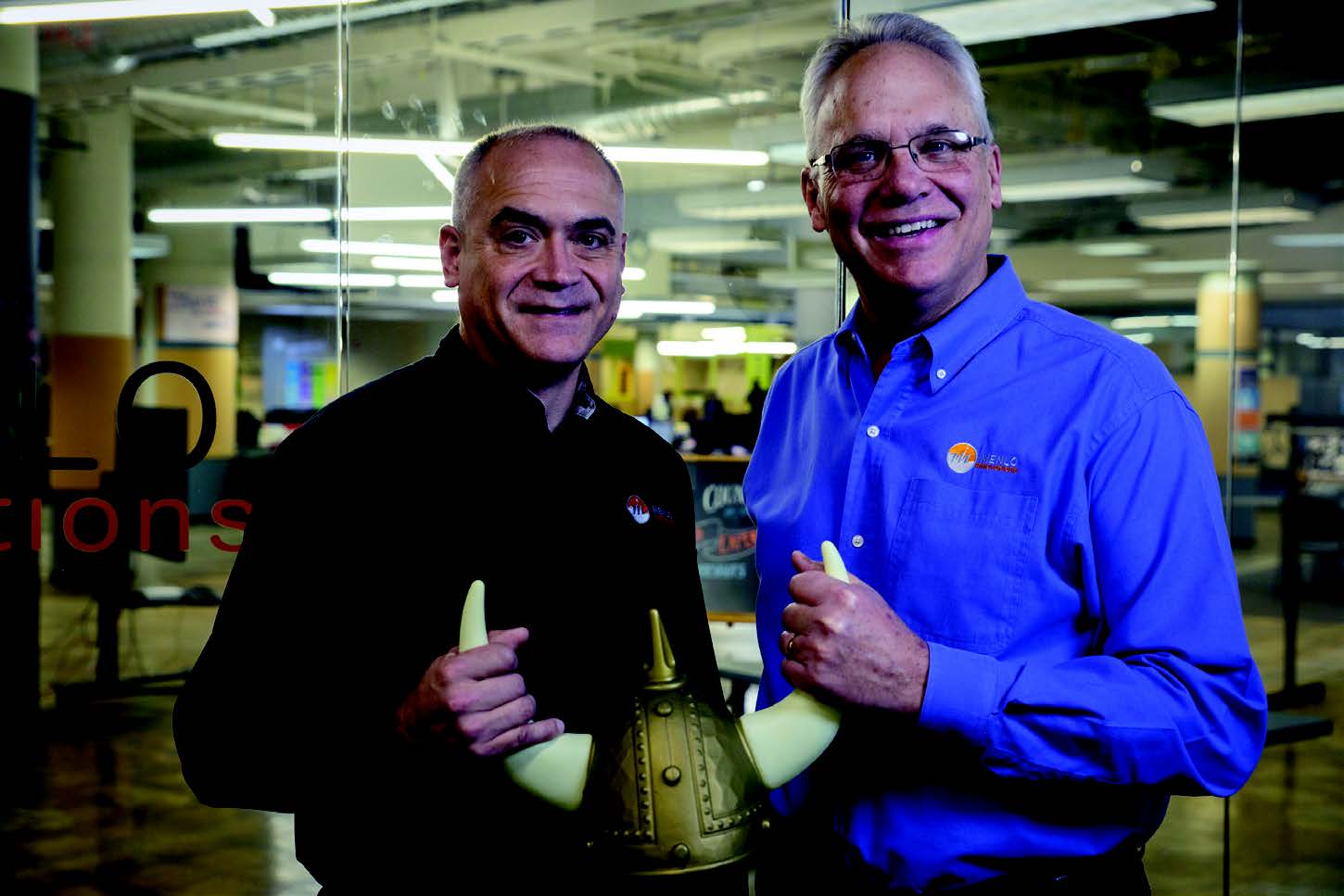 James Goebel, chief operating officer, and Richard Sheridan, chief executive officer, founded Menlo Innovations in 2001. They are holding the Viking helmet that the company uses as a “speaking token” during daily stand-up meetings.

Can there truly be a business operating culture in which joy is intentional in every step? Richard Sheridan, CEO and chief joy officer at Menlo Innovations, a software design and development company in Ann Arbor, Michigan, believes so. For Sheridan, a thought leader who has two computer engineering degrees and is the author of two game-changing books, the need for workplace joy is real. He says it emanates through “the work of your hearts, your heads and your minds.”

As the AME Chicago 2019 conference chair, I had a chance to talk with Sheridan in August 2018, having just ordered a copy of his book, “Joy, Inc.” I was curious and wanted to learn more about his obsession with joy, and whether he might be a possible fit as a keynote speaker for our upcoming conference. After all, his company had been awarded the Alfred P. Sloan Award for business excellence in workplace flexibility for eight straight years. The award recognizes employers that use workplace flexibility to meet both employer and employee goals.

Having read only parts of his book before the interview, I remained open-minded. However, it was clear to me that Sheridan and his take on leadership was not your typical boilerplate view.

At the interview, Sheridan began by sharing a brief history of himself, his pre-Menlo days as a successful programmer and eventual promotion to vice president of R&D at a major software development company. It was a career that Sheridan said, “was financially rewarding but lacked the self-fulfillment” that he thought was not only possible but necessary for success. He cited as problems “the everyday chaos, bureaucracy, lack of teamwork and missing human connections.” His choice of words and tone of voice revealed to me how distressed he had been at that point in his career. For me, his words resonated.
I had experienced similar emotions in my career, and I felt certain many AME members and other business leaders had as well.

Menlo has articulated the cultural expectations of its critical behaviors as follows:

Tom Peters, leadership guru and author of sixteen books, motivated Sheridan with his stance on business excellence and his assertion that leaders must care about their people.

All of Sheridan’s experience—his career disappointments, the personal conflict in who he was and wanted to be, and the encouragement of enlightened leaders before him—guided him when he decided to start a company. It was then that he made the decision that would forever change his life and the lives of those around or would come in contact with him.

The traits of joyful leadership

Getting back to our talk, Sheridan shifted his attention to the topic of joy in the workplace and what he thought was needed to create a profoundly different operating model. He believes his mission as Menlo’s CEO is to take risks, experiment and inspire a team to take a journey toward joy. His role is to develop joyful leaders and elevate the human energy of his team. His goal is “to see joyful outcomes, produced by people working in a joyful workplace.”

When I incorrectly phrased a question about the overall happiness factor at Menlo, Sheridan clarified that joy and happiness, in his view, are not the same. “We can remain joyful, yet be unhappy with ourselves and our work at the same time,” he said. He cited an example whereby a software development project is not going as planned, and the team can be supportive of those directly involved. “Joy, in this case, is in having a safe environment where people can work together to help each other work through a problem without fear of looking bad,” he explained. Ultimately,
I was glad that I had misinterpreted happiness for joy, because his clarification gave me a deeper understanding of what workplace joy means at Menlo.

We discussed traits of joyful leaders and Sheridan’s belief in the need for leaders to be grounded in reality, authentic, humble, optimistic, loving (yes, loving, as Bob Chapman, CEO, Barry-Wehmiller, was a mentor), visionary and servant to their teams. Mindful of the time, Sheridan and I discussed two of the traits, servant leadership and authenticity. (He will share his thoughts about all seven traits in his AME Chicago 2019 opening keynote.)

On servant leadership, he offered a metaphor about how great leaders learn to balance their organizations successfully. As an airplane pilot, Sheridan knows you must learn to balance the four fundamental forces of flight, including lift, weight, thrust and drag. He sees similarities with leaders in, “their need to lift the human spirit; eliminate the drag of fear from the organization; reduce bureaucracy and meeting load, which like gravity, can pull the organization down; and use purpose, like thrust, to positively change-pull us forward.” 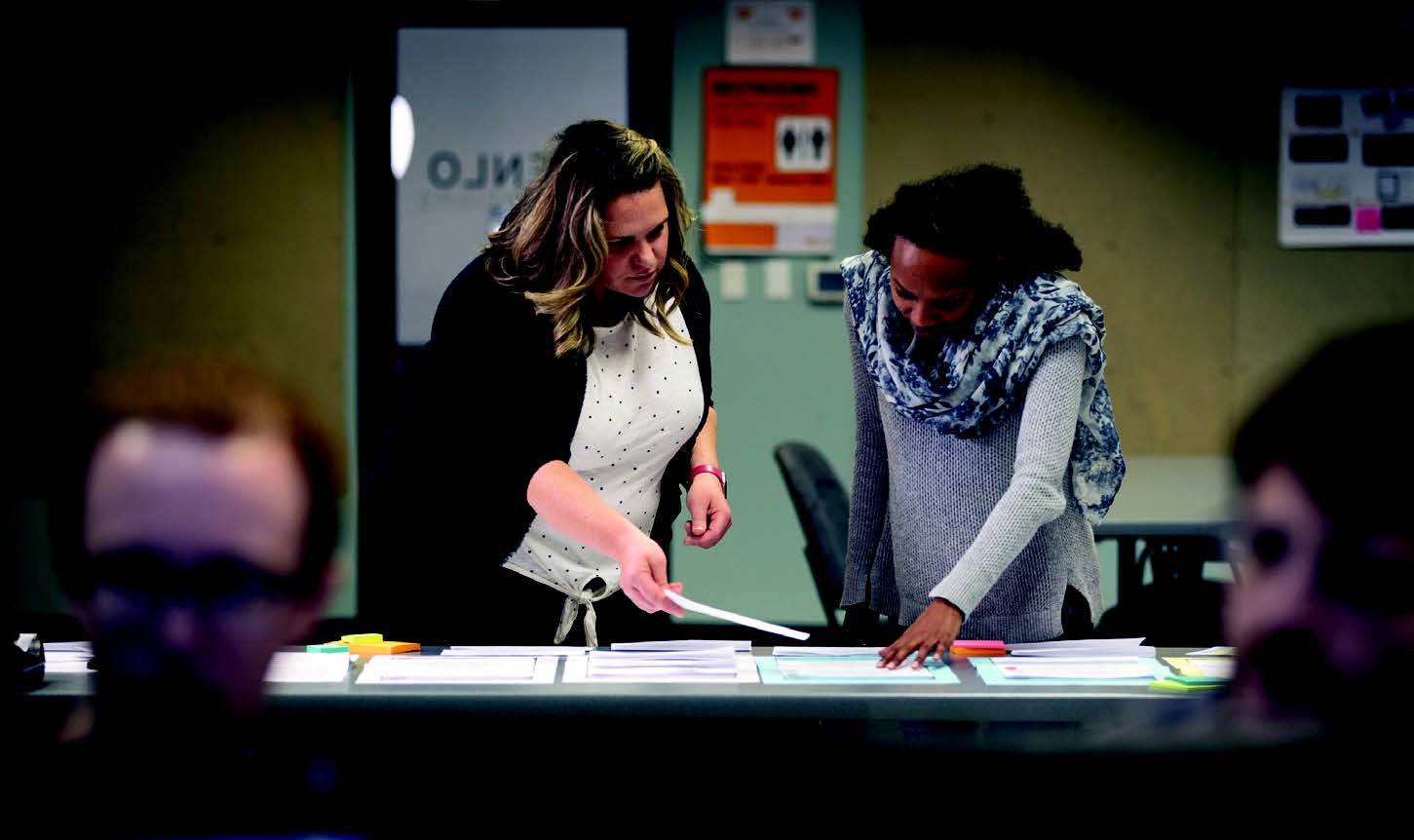 Emily Stoev, senior project project manager (at left), works together with Helen Hagos, software
developer. Menlo’s practice is to have all employees work on projects in pairs.

Next, he talked about authenticity. He described how Menlo had been deeply touched during the visit of a Michigan non-profit, Ele’s Place. The organization works to end the silent suffering of grieving family members who’ve lost a loved one. Using white face masks, family members using Ele’s Place for support write on the side facing out how they wanted the world to see them, such as, “I’m okay”; while on the inside recording how they truly felt, “I’m scared.” Menlo team members contemplated how hard it is for leaders to be more authentic about their inner feelings, such as “I’m stressed,” than those on the outside that read, “I’m confident.”

As the interview moved along, I started to realize that this is not what “real” companies do or how CEO’s think and act. I learned from Sheridan that Menlo works differently than most. Leaders at the company directly communicate (no internal emails here) and tell many stories amongst themselves to establish secure connections with each other. People sit together, work closely in pairs and strive “to help their partner look good.” Each day begins with a brief stand-up meeting, in which each pair provides updates, milestones achieved, where they need help and other feedback in a culture of sharing.

On some days, visitors, young babies or even someone’s family dog may attend. Everyone is involved in all the human processes of interviewing, selecting and, yes, even firing their working counterparts (a rare occurrence at Menlo). Sheridan adds, “when I or, another employee, steps out of character, they are challenged AND soon after forgiven for their transgression.” 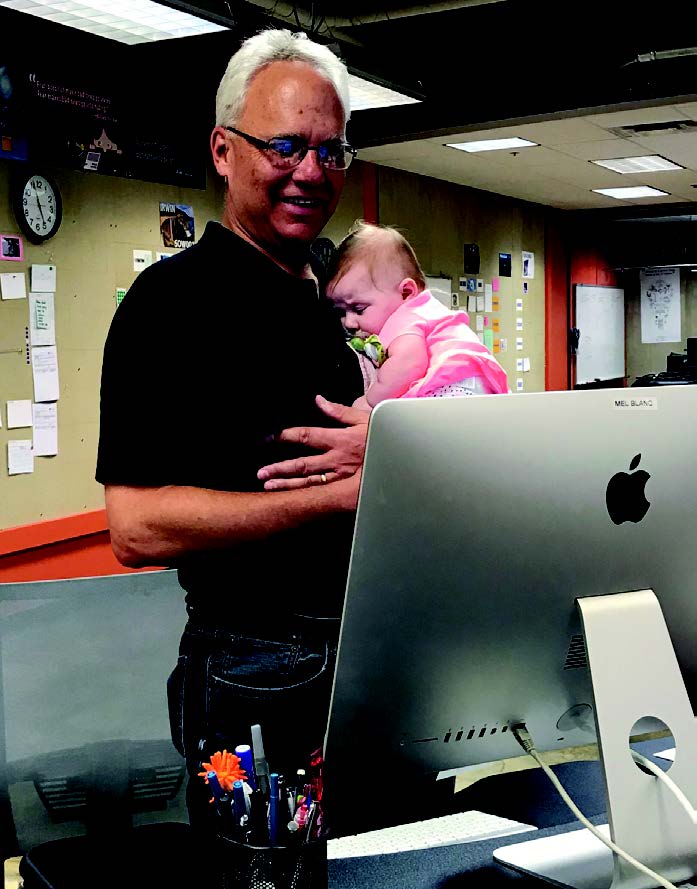 As part of Menlo’s efforts to encourage work-life balance, babies are welcome at the office during the workday. CEO Richard Sheridan often takes a turn holding them. Here he carries Flynn Boonstra, daughter of Anna Boonstra, experience manager who has been with the company for seven years. Flynn is Menlo baby number 21 to come to the office.

When I access the Menlo website or read its monthly newsletter (I am a subscriber), I find many stories and testimonials from employees and clients.

From a client, a sentiment affectionately referred to, in-house, as “The Menlo Effect”:

Begin with what you believe

With the interview complete, I thank Sheridan, talk about his availability to keynote and hang up the phone—but I continue thinking about his story. His book is eventually delivered, and I read it. Then I order and read his next one, “Chief Joy Officer,” upon its release. I learn more about Sheridan, his Menlo start-up and how he covets a workplace where joy is commonplace. A workplace in which he and his co-founder, James Goebel, and with the collective input of its people, would establish a value driven manifesto for an operating culture that, “creates meaningful, sustainable, positive, human impact; always demonstrates integrity and authenticity; and acts in a way that expresses care, hope, love and joy,” as further supported by seven expected behaviors (each as different and defining in context as Menlo itself).

When we first developed the theme for the Chicago conference, Leading on the Edge, we were thinking of leaders who were not afraid to challenge the status quo. We wanted to identify purpose driven leaders who inspire and motivate through action, while simultaneously building a collaborative environment of trust, respect and a lack of fear in delivering real change. If Sheridan and Menlo Innovations’ culture was not a shining example of such a representation, then who and what company would be better? After all, the 3,000 or so visitors who visit Menlo each year must have a good reason for going there.

I’m sharing through this article what I experienced that day during our extraordinary interview and why, ultimately, Sheridan became the overwhelming choice to open this year’s AME conference. Rarely do most of us meet such creative and genuine leaders, and even more rare is the opportunity to meet with them in person and share time with them.

For AME Chicago 2019, Sheridan will not only be the opening keynote speaker but also will conduct a deep-dive session and be available throughout the conference as our resident ambassador of joy.

I very much look forward to meeting up in Chicago and continuing my relationship with Sheridan long after our conference is in the past. Until then, let me leave you with a few of Sheridan’s takeaways on what he sees as being humanly possible in the pursuit of “joy in the workplace” if as a leader you:

Greg MacDougall, the AME Chicago 2019 conference chair, has been a member of AME for over a decade, including stints as conference keynote co-chair in 2015 and 2016. Formerly manager of total quality systems and lean at Cogent Power Inc., he is president of GMacDougall Consulting in Ontario, Canada.