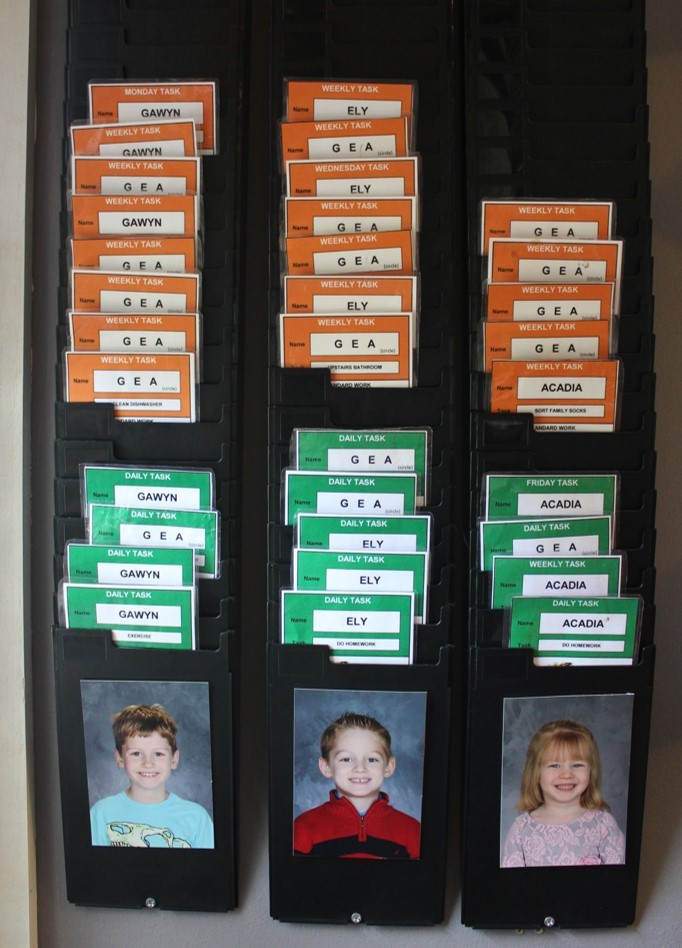 Lean brings order to chaos. I know of nowhere more chaotic than my home, with five kids under 8 years of age, not only are we in the business of manufacturing children, we are also in the business of manufacturing messes. Over the years my wife has had to come to grips with the fact that I take my work home with me. Meaning, I couldn't spend so many hours at work improving processes and eliminating wastes and making things run smoother and not try to do the same at home. Especially when I see how much effort she puts into keeping an orderly and well-run home. Once we bought our first home in December of 2015, she was finally willing to give me free range of any area of the home.

I decided to attempt to tackle the greatest challenge a parent has ever faced; Getting their kids to do chores. I know, many of you reading are probably thinking, “Chris, why not try to tackle something easier like solving world hunger or reversing global warming!” Although this task seems daunting, I knew lean was up to the challenge.

Creating a visual workplace is one of the ultimate goals of any organization trying to apply lean principles. A visual workplace can be defined as a self-ordering, self-explaining, self-regulating and self-improving work environment, where what is supposed to happen, does happen, on time, every time, – because of visual solutions. Doesn’t having a visual workplace in the home sound AMAZING? The way you accomplish this lofty goal of a true visual workplace is to design and implement a series of visual management systems, that when in use, will ensure that everything that needs to happen, does happen, and when there is an issue, those issues are easily visible. In other words, if the system is running properly you will know when a problem occurs. Think of it like your low fuel light on the dashboard of your car. The light comes on when it needs your intervention. It is alerting you that there is an abnormality, in this case, that your gas tank is getting low. Creating an effective chore system is a small step towards achieving the ultimate goal of a visual workplace.

When I sat down with my loving and patient wife, to strategize together on how to go about implementing an effective chore system, we began by breaking down all the tasks that we thought the children should do and assigning them a frequency of either daily and weekly. Given the varying ages of the children, we wanted the chore system to be intuitive enough that they could be understood without the need of reading. You can see across the top line are daily chores associated with; making their bed, hygiene, feeding animals, doing homework and doing dishes. Each day they were also expected to perform at least one weekly chore. 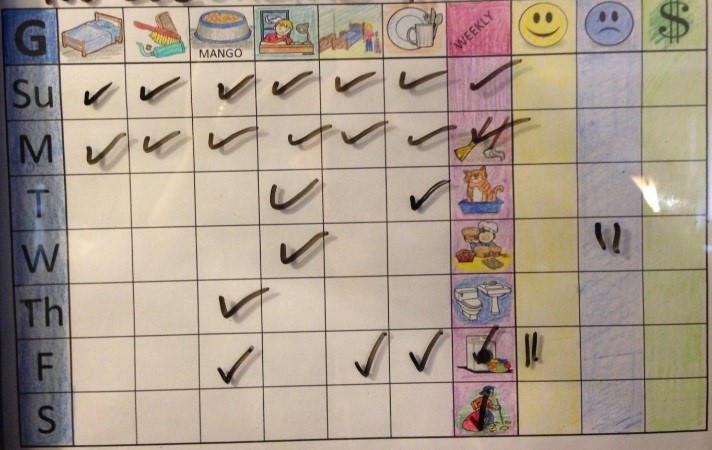 We set up an award system to reward both what they did and the behaviors they exhibited as they did it. Daily chores were worth 10 cents and weekly chores were worth 20 cents. The Happy and Sad Face columns were used to reward or punish their behavior. So, if they did their chores happily, or if they were helpful with their younger siblings, they would be rewarded 20 cents per tally. Likewise, if they whined and cried through doing their chores they would receive negative 20 cents. Each day we would tally up how much money they earned.

We trialed this process for a couple of months and identified several areas that the chore system was failing in. The main areas that we wanted to address were; lack of flexibility with when chores are done, inconsistent ways of doing the chores, and even though all chores were being done, we still had a messy house. After discussing these gaps in our process we brainstormed on ways to fix them.

What resulted was a task-card approach to a chore system. Each card represents one chore that a child needs to complete. Each day, daily chores (red headers) would start out red side facing out. As the chores are completed they are flipped to the green side to signify that they were completed, reviewed and accepted. Also, each day a weekly chore (orange header) is selected based on need, by the parent, to be added to the chores to be done that day. With the “grid-like” format of the first attempt, there was very little flexibility to be able to assign a job based on need instead of arbitrarily saying bathroom day is on Monday. What if the bathroom is fine on Monday, but gets destroyed on Tuesday? Should we really have to wait a week to take care of it? With the T-Card approach, the parent can influence what chore gets done when. If there is no preference that day the child can choose.

If a chore is specific to an individual child, their name is printed on the card. For example, each child has a "clean room" card with their name printed on it. Some chores can vary on who does the chore depending on the week (we set up a rotation for who is responsible). Those chores have the initials of each child on the card and at the beginning of the week the parent circles the letter of the child responsible that week for completing the chore. 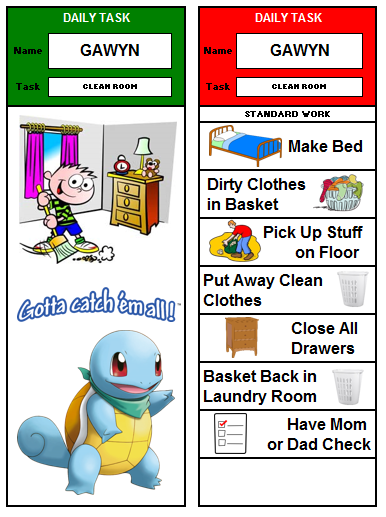 On one side of the card is a picture to signal to the child what the chore is. In the example featured, it is a picture of someone cleaning their room. Also on this side are different Pokemon pictures. This was an attempt at having fun with the chore system. My older kids are obsessed with Pokemon, so the idea of them being Pokemon Masters; searching out Pokemon to capture, engaged them a little more in doing chores. The other side of the task card is where we addressed the issue of inconsistent ways of doing the chores. Our first attempt addressed very well what we wanted the kids to do, but failed to teach them how we wanted the chores done. Another way to look at it was that the previous chore system was actually very disrespectful to my children. We were expecting our kids to go and clean the bathroom, but did I ever stop to think about whether they even knew HOW to clean the bathroom? Is training a 4-year-old once and expecting them to remember every step really fair? Creating standard work was critical to making a system that was fair for everyone involved.

Standard work is simply a set of detailed instructions explaining what to do to accomplish a task. Another disrespectful aspect of the previous chore system that adding standard work fixed was how we as parents evaluated their work. Often depending on the day, and whether I was tired or in a good mood, the same exact work would either be acceptable or unacceptable. Without a standard, the expectation of what was good enough was constantly changing based on my mood, which is totally unfair for the kids doing the work, and ultimately created an environment where doing a good job was discouraged. Now the children have a set of instructions, both written and with pictures, informing how to do the task. The parents also use the same standard work to evaluate whether the job was done properly. Having a standard eliminates subjectivity, and in turn, creates a system that is fair for all parties. 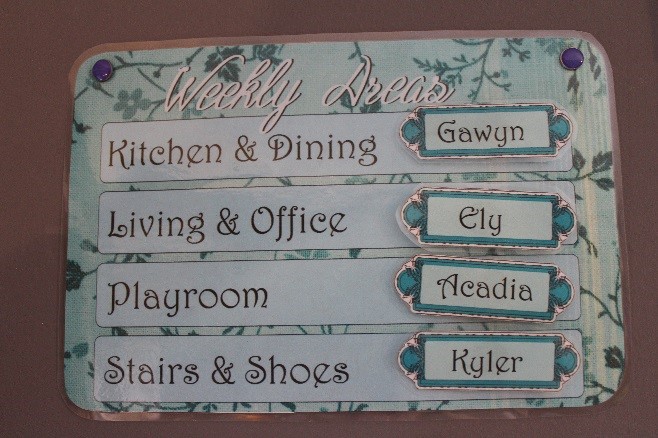 After we rolled out the new visual chore system, we noticed one big problem. Even though the chores were being completed, the house was still messy. We quickly realized we forgot about the "common areas" of the home. So although the kid's rooms were clean and the laundry and dishes were being processed daily; the kitchen, family room, playroom, stairs and mud room were all still a dumping ground. To correct this, we set up a rotating schedule and specific task cards for the kitchen, dining room, playroom and mudroom. Each child rotated through these "common areas" weekly. The name tags of each child have velcro on the back so they could be moved each week. Each "common area" had two sets of task cards, one card for daily tasks and another card for a weekly "deep clean." 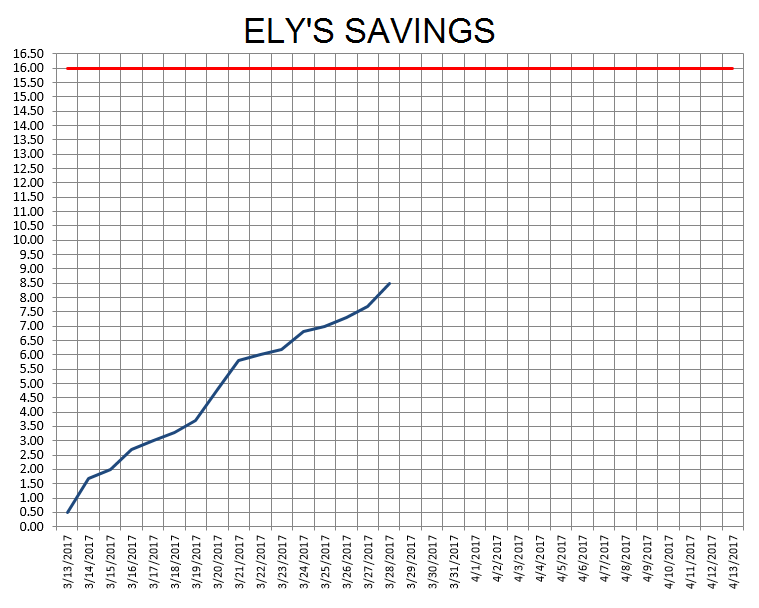 During the first weeks, we enjoyed an initial burst of enthusiasm from the kids on doing their chores, but as with most lean initiatives the excitement faded and sustainment was a struggle. To keep the kids engaged, we continued the rewarding system we had with the first attempt; 10 cents for daily, 20 cents for weekly. To improve this, we made it more visual by creating visual bank accounts. At the end of each day, we would gather around the task cards, count how much each child made and plot it on a line chart. We found it worked best when the kids could pick out something they wanted to buy and the cost of the item would be shown as a red target line on the chart. This helped them see the impact of their work each day as they could see daily their money getting closer and closer to the goal. Besides being more motivated to do their chores, we also noticed the kids quickly became very frugal. They discovered eBay and Amazon and would spend their very limited electronic time each day (15 minutes) to surf the web looking for the best deals to spend THEIR hard-earned money on.

By making the chore system visual, adding standard work and establishing a daily cadence of auditing, chores are getting done more consistently and correctly. Although this was a significant improvement, there is still lots of aspects to improve. Like all change, it is better to start with something and improve over time than to hold out and wait for the "perfect" process.