How often do you find yourself pulling your hair out with employees who aren’t measuring up to your expectations? You’ve put the job plans in place.  You’ve coached. You’ve coaxed. You’ve had the 1-1s on the corrective actions required, and you’ve seen temporary improvements… and backsliding.

Maybe you’ve found yourself hanging onto them because they’re “not that bad.” You want to believe the best of people (and you should) so you cling to the hope that somehow, someday, something will change and they’ll “get it?” Maybe you’ve fired them, hired a replacement with high hopes, and found yourself repeating the same cycle all over again. You’re drained of time and energy at the end of the day, not getting your own priorities done because you’ve spent the day herding cats. Meanwhile, their lack of productivity and negative impact on those around them is costing you a bundle.

The Simple Solution and the One Question You Need to Ask

That was the case for the CEO of a $100 million manufacturing plant. The simple matrix below helped him create an action plan for every one of his troublesome employees in a firm-but-kind, people-centric way, with one surefire question to ask yourself that cuts to the chase every time:

Could they do it if they wanted to?

The great employees found in people-centric organizations are a blend of two traits: they live the culture of the firm, and they’re high performing.

What I call your Racehorses are never a problem to spot – they’re your positive, motivated, superstar performers who love the company and they just want to run to win. Simply get out of the way and give them all the support and appreciation they need to make great things happen.

The Four Categories of Underperforming Employees

Your troublesome employees are likely falling down on one or both of the necessary traits:

1. Donkeys:  Donkeys are just as easy to spot as Racehorses. In fact, I’ll bet you laughed at this term and started mentally putting names in that quadrant.  You’ve known for a while now that you need to terminate them, but for some reason, you simply haven’t taken action. It’s time.

2. Showhorses:  They’re high-performing yet toxic, throwing their weight around and highly demanding. You just can’t bring yourself to let them go, because you can’t imagine what you’ll do without your rock star, even though you know they’re having a negative impact. It’s a difficult decision until you ask yourself the One Question.

3. Plowhorses: They get the job done – sort of – and they’re often dependable plodders eager to please. They are poster-children for your culture and often the ones who organize the annual company picnic. Yet they can take up a lot of managerial time and attention by wanting to chat or seek approval or feedback. You’ll never have cause to fire them. You’ll never promote them. The One Question will help you make the tough-yet-kind calls to either find these nice folks the right place where they’ll add value or recruit stronger players.

4. Colts. They tend to be newcomers to the organization or those going through a transition phase after being promoted. They’re learning the culture and still trying to find their feet. If they do, they’ll be future Racehorses. If not, they’ll slip into one of the other categories. Within 90 days from today, make the call on their fit for culture and performance. 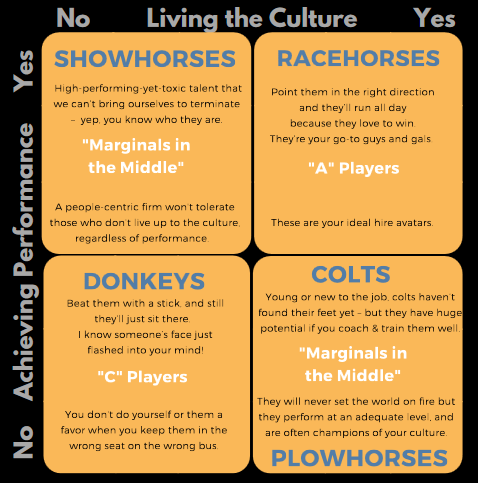 Could they do it if they wanted to?

Whenever you’re pulling your hair out with some aspect of their performance – the “it” – ask yourself that question. Base your next steps on an honest answer:

If the answer is NO, then you’ve got a training or development issue that can be addressed, and your only remaining choice to make is whether or not you believe they are worth the investment.

If the answer is YES, then you’ve got an attitude issue – they are choosing not to be a team player. Can attitudes shift?  Sometimes… again, it’s a question of the investment, and that’s not an easy answer.

People issues never entirely go away. The decisions leaders make about people who add or destroy value will determine the success or failure of your organization. There are specific processes for dealing with the No’s and Yesses to confidently make good decisions in each quadrant and take the essential steps to strengthen your team that are beyond the scope of this article. Start by downloading the infographic, and share it with your leadership and management teams as a tool they’ll keep handy to help them make better decisions quickly, decisively and constructively.