With the advent of Industry 4.0, manufacturing is at an inflection point, where technologies are advancing so fast that most companies’ people-centric leadership (PCL) capabilities are being challenged. Building on existing and developing technologies—from advanced robotics and machine learning to software-as-a-service and the Industrial Internet of Things (IIoT)—Industry 4.0 promises to transform the way manufacturers organize and execute global operations, from product design and production to customer service and corporate culture.

With such potential for disruption, the question arises: How should organizations, including AME practitioners and senior executives, lead this change within their organizations?

The good news is that many companies already are addressing the implications of Industry 4.0 from a business and an operating system perspective. They’ve found that Industry 4.0, while transformative, is a logical extension of what lean and six sigma have been addressing for decades; that is: manufacturers cannot afford waste or variability—and, as we adopt the new technologies, more waste and data-integrity flaws will be highlighted instantly. 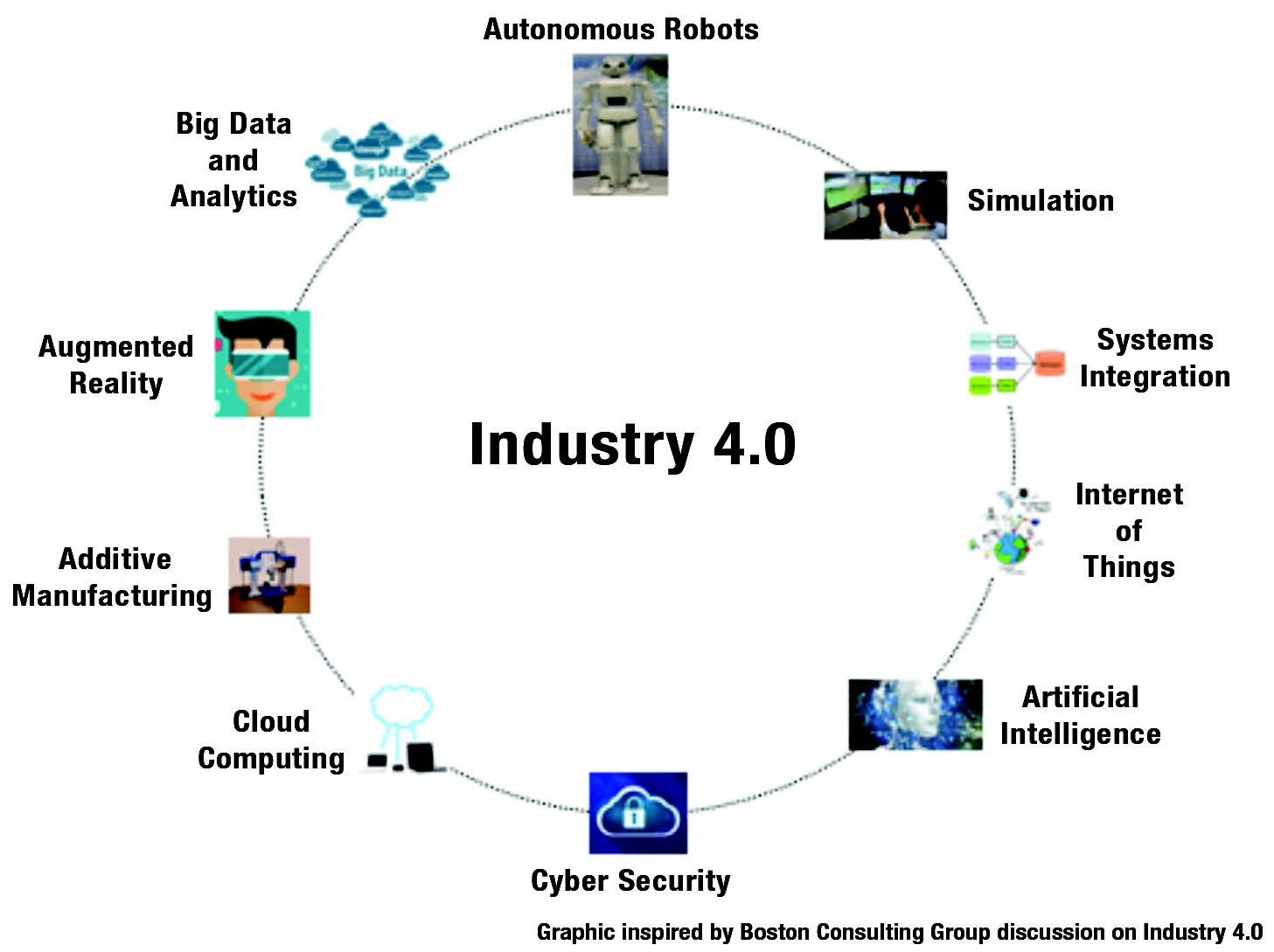 The Industry 4.0 technologies work individually and in combination to transform manufacturing business and operations.

That said, it is also true that manufacturers cannot continue with their current communication and control systems if they expect to achieve the benefits these technologies deliver. They must address the fundamental changes to leadership practices that are related to the classic “man and machine” interface. Because Industry 4.0 promises fast, breakthrough or step-change improvement, rather than lean’s continuous, incremental improvement, it will undoubtedly impact culture and leadership.

“Industry 4.0 and People-centric Leadership,” the workshop we’re hosting at the AME Chicago 2019, will help manufacturing and operations leaders gain a better understanding of the impact that Industry 4.0 will have on leadership workforce practices. The workshop will not focus on the features or selection of specific IIoT technology products or services.

During the workshop, participants will identify and prioritize their most significant knowledge gaps, which will help them deploy Industry 4.0 technologies and still retain and strengthen their PCL culture.

Today, we’re at a juncture: Industry 4.0 is on the rise due to automation and the ubiquity of computing power, which has spurred what many consider to be yet another Industrial Revolution. Everything is “smart” these days:

This new era of manufacturing, which was labeled over a decade ago, bears many similarities to earlier revolutions. As before, the latest technology builds on older technology to automate and streamline previously manual, fragmented workflow processes. This era of Industry 4.0, however, is not defined by a single technological advance, but rather refers to the convergence of many different technologies, including autonomous robots, big data & analytics, additive manufacturing, cloud computing, artificial intelligence and more. The challenge to manufacturing executives and frontline leaders is to strategically implement these technologies at their companies while developing a company culture that still puts people first.

How Industry 4.0 Changes Manufacturing: With the introduction of technology, manufacturing is shifting from an emphasis on job shop and mass production to mass customization and niche production.

Value creation in the 21st century continues to increase in complexity. Companies are expected to personalize their products, services and communications for a user, and deliver them “today” with “perfect” quality. Companies achieve personalization by gathering more and gaining a better understanding of customer data. The technologies that define Industry 4.0, from cloud computing, the IoT and artificial intelligence are critical to enabling companies to deliver on this complex value-creation proposition.

For many manufacturers, the question is: Will Industry 4.0 replace lean? Based on lessons we’ve learned during the Third Industrial Revolution (see “The Four Industrial Revolutions”), the answer is a firm “No.” Merely applying technology to automate a process rarely works. Instead, manufacturers have found it is best to simplify and remove the waste from a process before automating it. Because lean is the foundation for streamlining work and eliminating waste, it remains critical to successful automation, including the deployment of Industry 4.0 technologies.

Just as lean manually streamlines workflows and integrates process steps— between manufacturing process tasks, business and production, and supply network partners—the technologies that comprise Industry 4.0 promise to automate them. The goal of both lean and Industry 4.0 is to achieve more effective collaboration among parts of the extended value stream. Leveraging an automated and data-driven Industry 4.0 environment can only be effective if we have first simplified and integrated work processes.

Ultimately, Industry 4.0 technologies will enable greater value and service by accelerating data exchanges between connected devices or the user and operator, including:

The impacts on the creation, delivery and capture of value through the reconfiguration of business models due to embracing the Industry 4.0 are in varying stages of development. The paths of adoption chosen by leaders will also vary based on industry and company. However, the principles of the lean enterprise will continue to be at the heart of success in Industry 4.0.

One of the fundamental principles of lean is respect for people. As manufacturers adopt Industry 4.0 technologies, will they engage people to reduce waste and increase value delivery until they replace them with robots? Again, the answer is “No.” Addressing new business challenges and implementing new technologies requires knowledgeable, empowered and engaged frontline workers, which requires people- centric leadership (PCL).

Disengaged people will not be able to deliver the value and response demanded by customers today or quickly adapt Industry 4.0 technologies. PCL, which encourages employee knowledge development and engagement is far less risky than sticking to the traditional command-and-control bureaucracy, in which only the supervisors and managers are empowered.

By coining the term and offering programming about PCL, AME is urging its members to mobilize their leaders to embrace—and lead—the change that is taking place. AME defines PCL as, “A culture where every day, everyone goes home fulfilled by pursuing excellence and where everybody flourishes.” (1) The Boston Consulting Group links such lean practices with technology adoption, asserting: “Manufacturers seeking to optimize their operations need to understand the interplay between traditional lean management and Industry 4.0.” (2)

The Industry 4.0 era is expected to blur the differences between the work that people perform and the work that machines perform. Some technology leaders predict that cognitive work quite possibly could be the most impacted. With AI, a machine or algorithm might be “smart” enough to understand what should be done or might tell the worker what he or she should do! However, the impact of Industry 4.0 on the workforce has not been thoroughly studied, and the measures of “fulfillment” referenced by AME have not been recalibrated.

“Industry 4.0 and People-centric Leadership,” provides an opportunity for leaders to strengthen their understanding of how these two powerful forces will shape leadership and workforce practices. Presented from a leadership and organizational perspective, the workshop will share how digital manufacturing will change how organizations operate—but will not change the leadership fundamentals supported by AME for decades. It will demonstrate why organizations must think of Industry 4.0 technologies as the enablers of new work processes.

With an overview of all the technologies and IIoT applications, this workshop will explore how PCL and Industry 4.0 will lead to new manufacturing strategies that are powered by data, information and knowledge.

During the workshop, participants will complete several exercises and engage in roundtable discussions. The interactions will help them better understand the technologies and how they could impact their leadership and workforce practices. For example, to help attendees assess their current state and prioritize their most significant gaps, each participant will use the Leadership Strategic Assessment Tool (LSAT) to explore the Industry 4.0 implications across three categories: business, technical and people-centric leadership. The tool guides users as they explore the three by asking:

Other hands-on exercises will not only reveal participants’ perceived gaps but will help them address those gaps in a logical, thorough, people-centric manner.

To better understand Industry 4.0, it’s best to review it in the context of the first three revolutions.

Industry 1.0 began with the very basics of a craftsman making a product. In the 1850s, Eli Whitney introduced the concept of “interchangeable parts.” In the 1900s, Fredrick Taylor pioneered the practice of “standardized work.” Further advancements promoted the use of coal, water and steam as energy sources, which led to the steam engine and other innovations. Together, these new ideas and technologies enabled the large-scale manufacturing of goods and products, such as textiles. The impact of the First Industrial Revolution on civilization was immense. With production no longer centered on the local crafting of goods, people moved to cities to work in factories.

Industry 2.0, launched by Henry Ford in the 1920s with the introduction of the assembly line, made “mass production” the growth channel for many companies. High-volume/low-mix became the “new game!” The enabling technologies driving the second industrial revolution derived from the availability of electric-powered mass production, which drove down the cost of products to fractions of the cost previously. Ford’s Model T sold for $250, while handcrafted automobiles cost ten times more. The Second Industrial Revolution allowed much of the progress of the first to move beyond cities and achieve scale across countries and continents.

Industry 3.0 began with the invention and adoption of computers. From the 1950s onward, computers and digital systems enabled new ways of processing and sharing information. Technologies such as computer-aided design (CAD) and computer-aided manufacturing (CAM) became popular. Later, more advanced concepts, such as computer integrated manufacturing (CIM)—which was introduced by Dr. Joseph Harrington in 1973 and the US Air Force ICAM (3) Program in 1976—were adopted. During this era, transistors, microprocessors, robotics and automation—not to mention the Internet and mass communications—accelerated the globalization of manufacturing.

Industry 4.0, while not completely defined as yet, is all about using computer technology, IoT and especially networks to improve production. This Fourth Industrial Revolution takes computing to an entirely new level, toward a “cyber-physical” world where data-driven decision making, augmented reality, artificial intelligence, autonomous systems and “the cloud” are changing the fundamental manufacturing industry paradigm. The predicted impact is for higher-skilled employees working collaboratively with robots with the horizontal organization becoming a reality. For example, several companies use Google Glass to deliver work instructions to operators on the line.

This article originally appeared in the Fall 2019 issue of Target magazine. Ken Rolfes, president of KDR Associates, leads the AME San Diego Consortium and served as a corporate officer and senior vice president of Operations at medical device and industrial products manufacturers. Lenny Perry, associate professor of Industrial Engineering at the University of San Diego, researches, consults, instructs and collaborates on numerous quality improvement projects in biotech, healthcare, defense and traditional manufacturing organizations. Dan Shunk, professor emeritus at Arizona State University and distinguished PIMSA chair at CETYS Universidad in Baja, Mexico, formerly was the director of the ASU CIM Systems Research Center and vice president at GCA. He was a co-founder of the USAF Integrated Computer-Aided Manufacturing program. All three are members of the AME Western Region board.